Internal communications sent to Greens MP and health spokesperson Cate Faehrmann overnight by frustrated health workers shows that, despite assurances to the contrary by the Health Minister and the Premier this week, the state’s public health system is shockingly unprepared to cope with the current outbreak, putting the health and safety of doctors, nurses and patients at risk.

Yesterday, Westmead Hospital emailed all staff (below) declaring they are ‘standing up an Emergency Operations Centre to support an internal disaster management response’ due to the overwhelming amount of covid cases at the facility.

The Sydney Local Health District also distributed a memorandum (below), after an emergency meeting yesterday of their PPE (personal protective equipment) committee, which read “the primary concern for the district is a very high utilisation (beyond what was anticipated) of N95 masks due to the expanded areas of the hospital being used for managing suspected or confirmed COVID patients”.

“To say this is an abject failure on the Government’s part just doesn’t cut it. They have had eighteen months to prepare for an outbreak of this scale. How on earth can our major public hospitals already be rationing face masks which are so essential to prevent infection of our health workers?” said Ms Faehrmann.

“We might not be anywhere near the peak of this outbreak, especially in terms of hospital admissions, yet our public health system is already struggling to cope, something the government seems to be keen to hide.

“Just on Monday, the Health Minister responded to questions I raised in Budget Estimates saying that no concerns have been raised with him about any ICU capacity at risk or experiencing any major challenge. Yet just 24 hours later, Westmead Hospital has declared Code Yellow and said they don’t have the internal resources to cope with the demands in their ICU.

“Yesterday, I wrote an urgent letter to the Minister Hazzard outlining eight things he can do immediately to resource our hospitals and ICUs, including putting a call out for retired nurses to temporarily rejoin the workforce and calling on nurses in states not dealing with outbreaks to assist.

“All the ICU beds and ventilators in the world are next to useless without the nurses to staff them. Unfortunately we’re seeing the consequences of this Government ignoring warnings of nurse shortages for years.

“Either the Minister’s own senior health officials are keeping him in the dark or he’s keeping the public in the dark about the capacity of the state’s health system to cope with the deepening covid crisis. A public health crisis is the time to be more transparent with the public, not less,” said Ms Faehrmann.

Letter from Cate Faehrmann to the Health Minister yesterday. 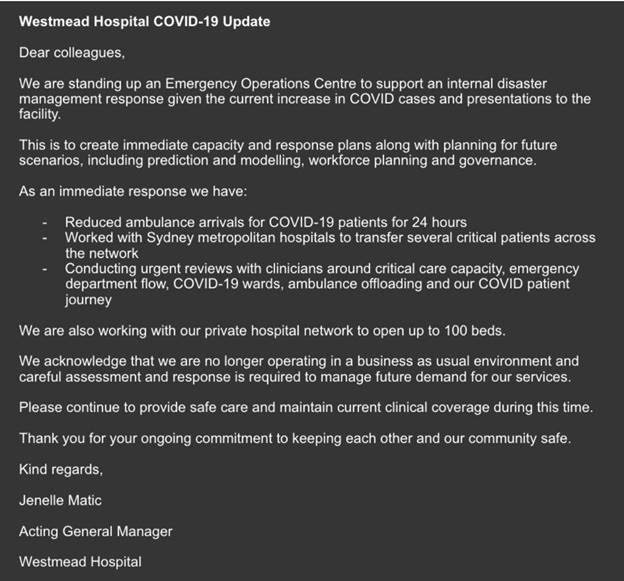 Mr President, I proudly rise to introduce the Health Services Amendment (Nurse-to-Patient and Midwife-to-Patient Ratios) Bill 2022.  The Greens fully support the NSWNMA and its demands and this bill gives effect to the majority of the NSW Nurses and Midwives 2022 award claim.

Greens MP and health spokesperson Cate Faehrmann has introduced a bill to legislate nurse and midwife-to-patient ratios into the NSW Upper House today which would mandate safe levels of staffing in public hospital emergency departments and wards across the state. The Health Services Amendment (Nurse-to-Patient and Midwife-to-Patient Ratios) Bill 2022...

Liberals have rocks in their heads when it comes to koalas: Greens

Liberal party MPs have rocks in their heads when it comes to koalas and if they think that reigniting the Koala Wars won’t harm them at the state election, says Cate Faehrmann, Greens MP and koala spokesperson. Last week, National Party MP Dugald Saunders introduced a controversial bill that would...

The Opposition Leader, Chris Minns and NSW National Party Leader, Paul Toole, can break the stranglehold the gambling industry has on politics in NSW and neutralise any electoral threats the industry may be making, by also refusing to enter into any agreements until they act on the recommendations from the...

The Pokies Play You

The Pokies Play You

This is the climate emergency. We must act now.

This is the climate emergency. We must act now.