KILL THE BILL THAT WILL KILL KOALAS

The new koala laws, despite being nowhere near strong enough, were supposed to increase protections for koalas. But after John Barilaro and his anti-environment National Party MPs spat the dummy a new bill introduced by the Government is set to take us backwards and koalas and their habitat are more at risk than ever.

Click on the image to view Dailan Pugh's slides. 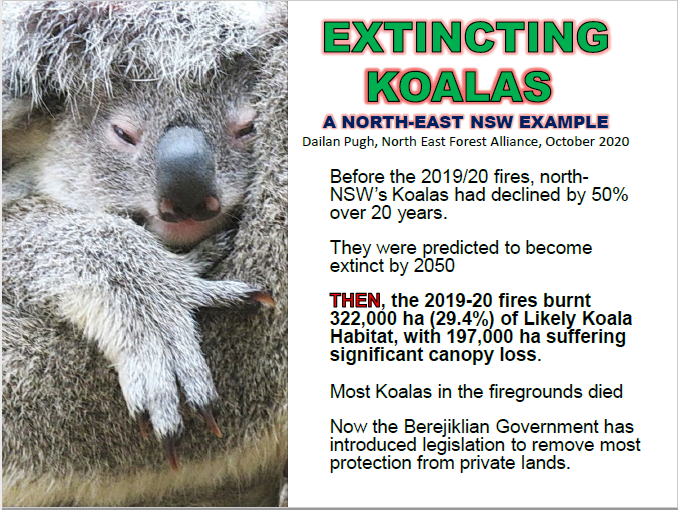 We need to convince all MPs in the Upper Houser to kill the bill! Click here for a full list of MPs.

Here are some talking points to help you with your conversations. Remember to be polite but firm about why they must oppose the bill.

This bill is the outcome of the stoush between the NSW Libs and Nats of new koala protections.

It’s a massive backdown by the Premier and her Planning Minister, resulting in the new laws to protect koalas actually being weaker than the ones they were replacing!

Powerful timber, developer and farming interests have won out over koalas and the environment with the Koala State Environmental Planning Policy, introduced on 1 March 2020, and its guidelines being watered down.

Worse, the ‘deal’ struck with the anti-environment National Party includes some significant changes to laws relating to managing forests, including core koala and other threatened species habitat, on private land.

The area of the state worst affected by this grubby deal is north-east NSW. On the north coast 61% of high quality koala habitat occurs on private property.

95% of forestry operations occur in north-east NSW and there is 467,341 hectares of land approved for private native forestry.

The NSW Audit Office explains that this is because that ‘over time, larger volumes of timber are being sourced from private land and being used to supplement timber supply contracts that the Government has with mill owners, particularly on the north coast.’

Approvals for PNF are now doubled to 30 years, which means no changes to conditions, or no restrictions can be placed on these approvals in that time. Thirty years is a long time.

The SEPP freezes the inclusion of koala habitat that can be protected, allowing only Six local government areas in the state - Ballina, Lismore, Coffs Harbour, Kempsey, Port Stephens and Campbelltown.

This bill also goes much further than allowing more koala habitat to be cleared.

It expressly prohibits the ability of councils to be able to control ‘allowable activities in environmental zones. This is what the National Party calling ‘decoupling’.

E zones provide fundamental protection for thousands of hectares of forests, wetlands and wildlife habitats in areas like the Far North Coast, the most biologically diverse region in NSW. They do this by setting core objectives for the purpose of the land and restricting certain land uses in the E zone.

Cate Faehrmann, Greens MP & water spokesperson and Helen Dalton, the Shooters, Fishers and Farmers Member for Murray, have slammed the most recent attempt by the Government to legalise floodplain harvesting as ‘another sneaky and disgraceful move’ by the National Party Water Minister.

A Greens motion condemning money laundering via poker machines and calling on the Government to urgently prioritise the development of measures that will stamp out the practice passed the NSW Legislative Council with agreement by all parties late last night.

Greens MP and drug law reform spokesperson Cate Faehrmann will introduce a bill into the NSW Upper House today to legalise and regulate the personal use of cannabis. This comes at a time when many jurisdictions around the world are moving to adopt various models of cannabis decriminalisation or legalisation...

The Independent Planning Commission’s decision. handed down today, to refuse Dendrobium’s controversial coal mine’s expansion underneath Sydney’s water catchment is a victory for common sense, the environment and the community, says Cate Faehrmann Greens NSW MP and Spokesperson for Water.